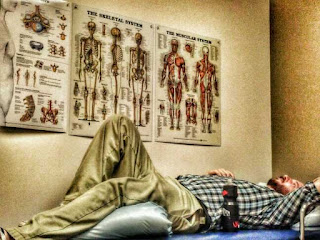 Sustaining a severe lower back injury is comparable to the disruption of the space-time continuum.  The idea of time being a forward motion is eviscerated as everything in your life comes to a halt.  Well everything stops, except for creditors.  My pain was beyond excruciating, it was debilitating; my ability to function as a normal “Thomas” was pathetically diminished.   Spiritualists or New Agers would have called my experience a personal Dark Night of the soul; a concept that suggests that one who is on a road to higher consciousness is initiated through trials and tribulations.   It’s a cute sentiment, but I don’t really consider myself to be on a life journey to higher consciousness.  A few years ago I would spew that self-important trash just to make myself look interesting.  Today I’m just a dude finding a way to abide.

The story of my lower back drama began over 20 years ago, (but to make a long story short), we can fast forward to March 20th of this year.  I went to work that day despite an intense amount of sore tightness on the left side of my lower back and buttocks, I made the attempt to push through the day.  Not even an hour into the day, and I knew I was in trouble, I was sent home to take the next three days to rest.  I must admit there was an internal sigh of relief.    The pain was obstructing my mobility and was only growing in agitation. Attempting to keep a positive attitude I continually reminded myself that I was fine and just needed a little rest.  Hopeful affirmations work for those self-help gurus, right?

The weekend was spent with a heavy regiment of hot showers and binging on Netflix.  There is no tranquility sweeter than the new season of House of Cards padded with reruns of Friends.  Unfortunately my situation was far dire than I had suspected and my remedy was not the suitable antidote that my body required.  By early Monday morning I was unable to stand or straighten my left leg.  Besides being able to crawl on my own, I was pretty much immobile. I was in desperate need of a resolution, so  it was decided it would be best to head to the emergency room. 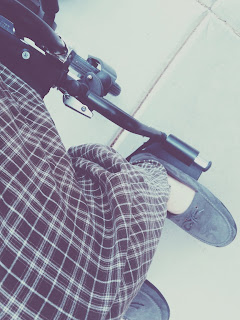 Within ten minutes of sitting in an examination room without ever receiving a legitimate exam, the nurses and doctors were writing scripts for testing, sticking needles in me and handing me a Pez dispenser of painkillers.  It wasn’t too long that I was feeling a special kind of funky fresh, in which I was sent on my merry way.  By this point I had no clue what was happening, and since I was also extremely high from the drugs, I didn’t really seem to care.  In hindsight, it seemed they just wanted to keep me sedated long enough with the hope that my body would work out the kinks, but there was no such luck.  Not even a full 24 hours had passed and I was vomiting every last trace of the pills.

With my head spinning in the grip of nausea as I dry heaved, my health insurance company attempted to contact me to inform me that any prescriptions from the E.R for further testing would  be invalid and wouldn’t be covered.  Instead, I would have to meet with my primary care physician first, having them order any future tests.  As if I wasn’t feeling bad enough, I had entered the complex maze of the healthcare industry. This maze is a place where many of those who enter rarely return, and those who do are forever bitter and cold.

As my condition worsened, I began to lose touch with everything that ever brought me joy.  I wasn’t able to perform the tasks at my job, riding my bike or hiking was out of the question; I couldn’t even continue to facilitate the local support group for suicide survivors.  How could I be present for someone in emotional pain, when I couldn’t find physical comfort while sitting down?  As for my creative and intellectual endeavors, I had lost both the ability and drive to continue writing my book or reading.  I was either in too much pain or too stoned from the collective cocktail of pharmaceuticals. 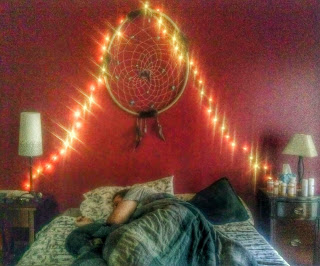 I was trapped; not just in my apartment, but trapped in a body that no longer cooperated with me.  With an extreme limitation of my mobility I was not only unable to care for myself, but I was also cut off from the outside world. Most of my days were filled with staring at the four walls of whatever room I was in.  My only escape was now watching food travel shows like “Man Versus Food” and “No Reservations”.  Besides the Internet, those shows were my connection to the outside world.  The only time I was able to get out and experience the outdoors was when I had to go to the doctor.

I was lucky enough to have a solid inner circle of people that were my lifeline.  If it wasn’t for my beloved, my folks, and my good friend Shawn, I fear I would have been doomed.  I was at their mercy, without them I wouldn’t have been able to accomplish simple tasks like going to the bathroom or bathing myself.  It’s amazing how much an abled body person can take something like movement for granted.  You don’t think about it, until it’s gone.  I was now facing an unimaginable humility at the age of 37.  Having the woman you love, your life partner, wash and clean your behind in the bathtub will do that to a guy.

I was eternally grateful to have the group of people I did, but even with their support, I was losing faith.   The longer I remained in my condition, the further I slumped into an emotional fog.  Without proper exercise, the ability to be self-reliant and a mind numbed by medication, the monotonous boredom from being confined to a bed was affecting my sunny disposition.  Becoming more and more bitter, I slowly began to detach from the man I knew myself to be.

For a moment there was a glimmer of hope; epidural shots and aggressive physical therapy freed me from my wheelchair, but that moment was short lived.  In the second week of my rehab I re-aggravated my back.  Any improvement I thought I made was gone; the slightest touch to my back was enough to make me scream out in pain.  With more visits to the emergency room and the pain specialist, I was in need of morphine on a regular basis to moderate my pain level.  Surgery was finally the only option.  After two months of enduring debilitating pain, I was ready for a solution; or at the very least to begin moving in the direction toward a solution.

To Be Continued...
Posted by Thomas_Brown at 1:48 PM No comments: